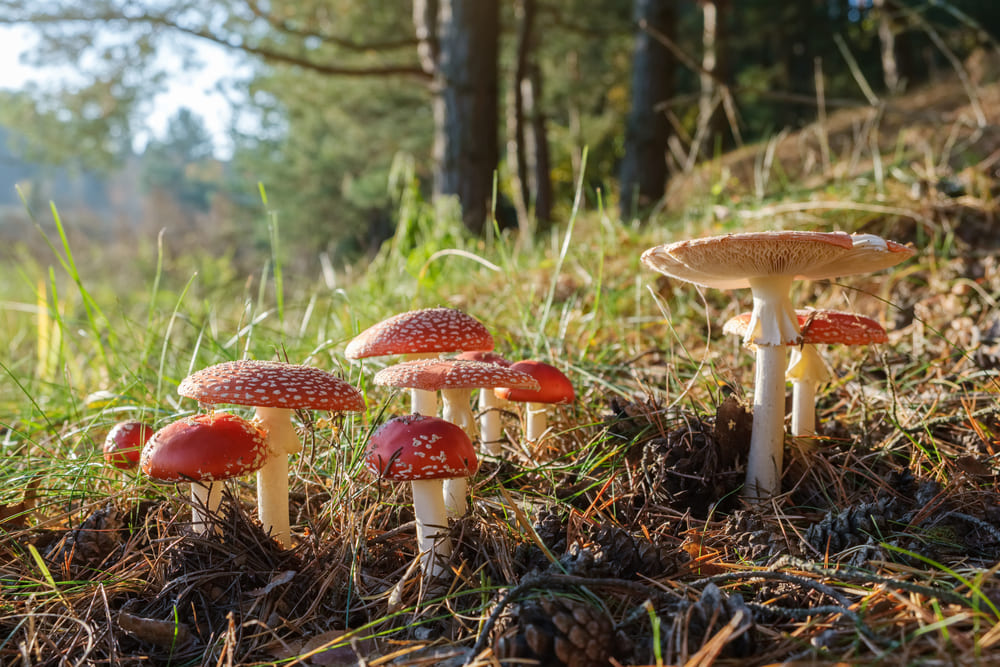 As most locals know, we are fortunate to live within a proverbial hotbed of mushroom production. In fact, Pennsylvania produces nearly 70% of all mushrooms in the country, the lion’s share being grown in our own Kennett Square. With National Mushroom Month being only a few weeks away, the month of celebration begins in September; it seems an appropriate time to discuss an issue that we don’t often consider; the fact that certain mushrooms are actually toxic to pets.

Mushrooms love to grow in warm, wet conditions; therefore, pets can be exposed to poisonous mushroom varieties from spring to late fall. Mushrooms can also “sprout up” very quickly if environmental conditions are favorable, making previously safe backyards and wooded areas potentially hazardous. Mushrooms can be challenging to identify for even the most avid enthusiasts. Therefore, recognition of clinical signs of intoxication and monitoring your pet’s environment for the presence of mushrooms is important. This holds true even if you are not an expert and cannot personally identify the exact type of mushroom where you live or in the places your pets are exposed to.

Poisonous mushrooms can be lumped into four general categories: hepatotoxic (those that affect the liver), nephrotoxic (affect the kidneys), neurotoxic (those that produce signs associated with the neurologic system), and those that cause gastrointestinal signs. Often toxic mushrooms affect more than one organ system, and therefore a larger array of clinical signs are seen. Symptoms may vary from mild and transient to fatal depending upon the type and amount of mushroom ingested.

Mushrooms often have interesting colloquial names, such as the death cap or death angel mushroom, the common name for Amanita phalloides. The genus of mushroom Amanita contains numerous individual mushroom types that can cause serious signs of toxicity in multiple organ systems. Exposure to these toxins may, in fact, lead to death, as the common name boldly implies. Consumption of even small amounts of the death cap mushroom will inevitably cause irreversible liver damage leading to liver failure and death.

Clinical signs of exposure to certain species of Amanita (death cap), Galerina (deadly skull cap), and Lepiota (deadly parasol) are unique in that signs usually do not present themselves until 10-12 hrs post ingestion.

Signs may be grouped into three distinct phases:

Heartbreakingly enough, most pets will die within 3-7 days post-ingestion.

Mushrooms that cause predominantly neurologic signs include hydrazine, isoxazole, and psilocybin (magic) mushrooms. Pets who ingest any of these mushrooms usually show clinical signs as quickly as 20 minutes but may take up to 6 hrs. Clinical signs usually resolve within 6 hrs of initial onset; however, drowsiness, dilated pupils, and seeming “out of it” may take up to 24 hrs to completely go away. Affected pets will be aggressive, disoriented, appear to have hallucinations, and may have tremors and vomiting. Their pupils will be dilated, and cats may begin frantically grooming themselves. Although frightening, most exposed pets will recover completely unless they have consumed mushrooms of the hydrazine type, which carries a more guarded prognosis.

Plenty of mushrooms cause gastrointestinal signs that are often mild and self-limiting but may be severe enough to warrant a hospital stay for observation, nursing care, and intravenous fluid therapy. In particular, muscarinic mushrooms cause more severe signs that can be dramatic to witness. Affected pets have vomiting and diarrhea, pinpoint pupils, watery eyes, drooling, urination, coughing, and wheezing. Sometimes affected dogs will go into shock if their heart rate and blood pressure plummet. Signs may present themselves within just a few minutes (15 to 30) after eating the mushroom, but the prognosis for a full recovery is usually good.

Although extremely rare and predominantly reported in humans, ingestion of Cortinarius spp. of mushrooms will likely result in damage to the kidneys. This type of poisoning is extremely rare in the US as mushrooms are more commonly found in Europe. Signs of toxicity include nausea, increased thirst, increased urination, and lethargy. The prognosis for complete recovery is guarded.

What to do if your pet consumes a wild mushroom:

If you witness your pet consuming any wild mushrooms and it is possible for you to safely remove the mushroom from their mouth, do so immediately. Do not waste time attempting to identify the mushroom yourself. There are thousands of mushroom species in the US, and even the most trained mycologist may have trouble identifying the exact type your pet consumed. Time is of the essence in treating these pets, and if confirmation of the identity of the mushroom is not possible, treating for a worst-case scenario is recommended. Immediate treatment consists of forced emesis (making the pet vomit), using activated charcoal to bind the toxins in the stomach, supportive treatment for vomiting, pain, and diarrhea, as well as medications to protect liver cells. Of the thousands of species of mushrooms, only some are poisonous, but treating every ingestion as if it is serious could save your pet’s life.