It has long been said that beauty is in the eye of the beholder. For some, the graceful lines of a Greyhound or German Shepherd Dog inspire awe, while others prefer the workmanlike substance of a Labrador Retriever or a Rottweiler. Interestingly enough, research suggests that many people prefer pets with infantile features, the so-called “pet face” appearance. Breeds with baby-like characteristics possess large eyes, domed foreheads, and flat faces; the Pug, French Bulldog, and Bulldog are great examples. In addition, these breeds often have characteristics that make them exceptionally good companions in that they love to spend time with their “people” and are usually exceptionally friendly. 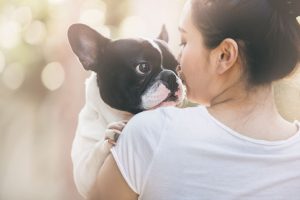 Why Are People Drawn to this Facial Type?

This set of facial features has been selectively or accidentally bred over the past few centuries. The breeds with the most dramatic and distinctive infantile features are collectively known as brachycephalic breeds. The word brachycephalic literally means short head. Dogs with the condition have short, flat faces and large eyes. Although these breeds are undeniably “cute,” this cuteness comes at a cost to the general health and wellbeing of the dog.

What Challenges do Short-Faced Dogs Face?

Breeding for a short face comes with major downfalls; It’s more difficult for a dog to breathe with a shortened nose and, therefore, much more difficult for the dog to regulate their body temperature in regards to cooling themselves. Dogs cool themselves primarily through the process of panting, and the panting process is much less effective in flat-faced breeds.

Anatomy Does Not Lie

From an anatomical standpoint, brachycephalic dogs certainly look different from other dog breeds. Their hallmarks are readily observed: a short jaw, flatter face, domed head, and large eyes. However, what the casual observer cannot see, is the dramatic anatomical differences this outward appearance imparts upon the internal anatomy of the pet and how it affects such simple everyday processes as breathing or cooling themselves down.

Everybody has heard the snores of a sleeping Bulldog or the “snuffles” of an awake and excited Frenchie. These snoring/gurgling noises are due to a constellation of anatomic challenges faced by these breeds. Brachycephalic Airway Syndrome was coined to explain the complications associated with several anatomic abnormalities: an elongated soft palate, stenotic nares, extended nasopharyngeal turbinates, hypoplastic trachea, laryngeal collapse, and everted laryngeal saccules.

The roof of our mouth contains a hard, boney portion (the hard palate) and a soft tissue portion towards the back of our throat (the soft palate). Unfortunately, in brachycephalic breeds, their boney hard palate has shortened, but their soft palate has not, and they suffer from a condition known as elongated soft palate. All the redundant soft tissues in the back of their throat contribute to a “sucking” or vacuum-like effect whenever they try to take a breath. This extra tissue can partially occlude the entrance to the trachea. This can make sleeping extremely difficult, and these dogs often suffer from sleep apnea.  Any situation where the brachycephalic dog must breathe rapidly, such as periods of exercise, excitement, or panting for cooling purposes, takes extra effort to push air in and out over the excessive tissues in the back of the throat. The tissues can easily become swollen and inflamed during periods of stress, thus making the process of breathing even more difficult.

Brachycephalic breeds often suffer from another anatomic defect called stenotic nares. Affected pets have very tiny nostrils (nares) that allow a much smaller volume of air to enter through the nose than would be found in dogs with normal nostrils.

Tiny nostrils are often accompanied by a trachea of narrowed diameter. This limits the amount of air the pet can bring into their lungs.

Nasal turbinates are essential structures that help to warm and humidify the air we breathe. Turbinates should not, however, extend beyond what is considered the nose portion of your face. In some brachycephalic animals, the turbinates extend well beyond the nose (into the pharyngeal area) and, in doing so, obstruct airflow. 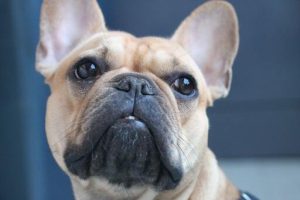 The increased pressure caused by a small trachea, small nostrils, elongated soft palate, and extended nasopharyngeal turbinates will dramatically increase the effort of breathing. Think of how difficult it is to suck a thick milkshake through a tiny straw; Imagine trying to breathe through that. These stressors can cause the cartilages and tissues associated with the larynx to collapse, dramatically obstructing the airway. In addition, Saccules, small pouches on the sides of the larynx, are also pulled into the airway due to the extra negative pressure and suction, resulting in further airway obstruction.

There is no question that a brachycephalic dog has a more difficult time breathing than a dog with a normal face. Depending upon a pet’s level of anatomic impairment, the signs they show may be mild such as increased snoring when sleeping to full-out collapse during times of excitement as they simply cannot breathe. The stress of breathing can lead to life-threatening increases in body temperature and complete oxygen deprivation to vital organs.  Sadly, all too frequently, brachycephalic dogs have presented to our hospital deceased or in severe duress after an extraordinary respiratory event.

What can be Done to Keep your Pet Safe?

There are some surgical procedures that can be performed to trim excess soft palate tissue and open up narrow nostrils. However, the entirety of brachycephalic airway syndrome cannot be corrected surgically. Severely affected dogs must never be allowed to become overheated, excited, or exercised to the point of stress. Affected pets should be kept in air conditioning and taken for short walks only during cooler times of the day. Discuss any concerns you have about your pet’s quality of sleeping, breathing, and ability to tolerate exercise with your Longwood veterinarian.

Unfortunately, the only way to truly improve the quality of a brachycephalic pet’s life is to change breeding and showing practices. Breed standards have changed dramatically over the centuries, and exceptionally short noses and “baby-like” features are consistently rewarded in the show ring to the detriment of these wonderful animals. Certain countries, such as Norway, have banned the breeding and selling of these dogs as a “violation of animal cruelty laws.”  Perhaps more countries will follow. It seems there has to be a happy medium whereby these friendly, companionable, and wonderful pets can continue to flourish and exist but with more compassionate stewardship and breeding practices that truly keep the pet’s health, safety, and quality of life at the top priority.