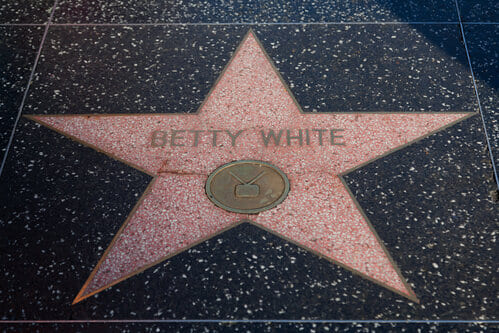 “Animals don’t lie. Animals don’t criticize. If animals have moody days, they handle them better than humans do.” Betty White

Today, January 17th, 2022 would have marked the 100th birthday of a truly amazing woman, Betty White. Born in Illinois, her family moved to Los Angeles when she was a young girl. She was a single child and grew up in a blue-collar family: her mother, a homemaker, and her father, a salesman and electrical engineer. Her parents loved animals, fueling a lifelong passion. Betty is quoted as stating that growing up, her family had as many as 26 dogs at one time. The introduction to her book “Betty and Friends” describes her parents as “genuine animal nuts, and I am eternally grateful that they have passed much of the passion on to me”.

Betty’s storied life included a long and varied career in show business starting with a starring role in her high school play that she, herself wrote. Instead of going to college, she dove into Radio and later Television. Betty is best known for two roles, her portrayal of Sue Ann Nivens from 1973-1977 in “The Mary Tyler Moore Show” and the beloved Rose Nylund from 1985-1992 in “The Golden Girls”. Her work in “The Mary Tyler Moore” show netted her two Emmys while she received one Emmy and six nominations for her portrayal of Rose from St. Olaf, Minnesota. To this day, several of our nurses consider the Golden Girls their favorite show of all time and watch it religiously.

White supported and admired talent in all people regardless of race or status. As the host of “The Betty White Show”, she made history when she awarded full cast member status to Arthur Duncan, a black tap dancer, and singer. This single act prompted outrage in some fans and critics recommended Duncan be removed from the show or see the show canceled. Betty famously told those opposing her to just “live with it” and even gave Duncan more airtime in response to their negativity.

Betty White is famously known for two things outside of her career in show business, her storybook eighteen-year marriage to her third husband and love of her life, Allen Ludden, and her devotion and dedication to all animals. Growing up during the Depression, a young Betty White and her parents often took care of animals whose owners had fallen on hard times financially and no longer could keep their beloved pets.

White donated money, volunteered her time, and served on the Board of Trustees for the Greater Los Angeles Zoo Association and the Los Angeles Zoo and Botanical Gardens. The Los Angeles Zoo is known for quality animal habitats that focus on improving the quality of life for the wild species in their care. Betty was instrumental in seeing the funds and special resources needed for such habitats were made available. In 2013, the Los Angeles Association of Zookeepers bestowed the title of “Honorary Zookeeper” on her. No doubt, she treasured the honor.

Betty White’s service to domestic animals is also unparalleled. She played a huge role in the Morris Animal Foundation, funding up to 30 research studies studying animal diseases and welfare as well as serving as a Trustee, Trustee Emeritus, and President Emeritus of the foundation for 50 years. Betty was also a generous supporter of Guide Dogs for the Blind and The Seeing Eye. White was involved with American Humane, an organization promoting the welfare, health, and humane treatment of all animals. She was particularly devoted to their “No Animals were Harmed” movement which was developed to promote the safe use of animals in the entertainment industry. Her support of American Humane and so many other animal organizations throughout her lifetime earned her the organization’s most prestigious National Humanitarian Medal and Legacy Award in 2012.

Today, January 17th, 2022 is a wonderful day to honor the life and spirit of an amazing human being by donating to an animal rescue or organization in need. At Longwood Veterinary Center we try to approach life with generosity and caring not unlike that shown by Betty White, all year long. We are proud supporters of the Delaware Humane Association, Faithful Friends, and Canine Partners for Life. On an individual level, our staff members dedicate time and money to rescue organizations saving dogs, cats, donkeys, horses, and farm animals. Let’s try today, and every day, to be just a little bit more like Betty White. Donate what you can, when you can to make this world a better place.