Oscar– the Labrador with So Much Life

How do I love thee? Let me count the ways. – Elizabeth Barrett Browning

February is the month we celebrate love: love for our significant others, children, friends, and even our family pets. Valentine’s Day is marked by roses and candy, stuffed toys and romantic dinners for many who celebrate the occasion. Before the 14th has arrived and well after the day has rolled by, replaced by other events and activities in a jam packed year, how do we best go about showing our affection for those near and dear to us? Surely not every day contains a dozen roses and perfect chocolate assortments. If you know Dr. Strine’s dog, Oscar, you know her family’s steadfast love and devotion to him goes well beyond stereotypical displays during a Hallmark holiday. He’s as much a rescue dog as can be. And so our story begins.

Before his battle with the rare osteosarcoma, Oscar was just another routine puppy patient at Longwood Veterinary Center nearly 13 years ago. He was an energetic and funny Labrador with poor manners and a huge personality that made it easy to forgive him for his “naughtiness.” His early months were routine, and he seemed to be growing well in every aspect– hitting all the normal puppy milestones. However, at one of his pre-neuter visits, a small mass of tissue was noted inside his mouth on his lower jaw. Weeks later it had grown larger. Any tumor in the mouth is cause for concern, but a fast growing oral tumor in a young dog rings all the alarm bells. As Oscar would be under anesthesia for his neuter surgery, it was the perfect time to evaluate the unusual growth.

Upon closer inspection, the appearance of the mass was most disturbing. It was much larger than first expected, and pushing some of his lower teeth out of place. A biopsy sample was taken and submitted for further evaluation. A week later a very difficult phone call was made to Oscar’s owners. The mass was a locally aggressive and potentially metastatic oral squamous cell tumor. Untreated, the tumor would likely spread to other parts of the body and would grow so large Oscar would no longer be able to eat. Although we could save his life, an expensive and radical surgery was necessary.

Oscar’s family made a very difficult decision. They refused to allow him to suffer but could not afford his extensive medical care. Initially opting to put him to sleep, they instead allowed us to look for a home for him. Longwood Veterinary Center took over his care, and set out to find someone who would take Oscar in, despite the extent of his impending medical bills and management ahead. Dr. Strine was the primary doctor involved in managing his daily care. She arranged for further diagnostics and talked to her husband, Dr. David Holt (head of surgery at the Matthew J. Ryan Veterinary Hospital of the University of Pennsylvania School of Veterinary Medicine), about this sweet little puppy with a big problem.

Dr. Holt met Oscar, and along with another UPenn surgeon, performed the successful and life saving procedure to remove the front half of his lower jaw. The tumor and all its potential complications were gone. Feeling compassion for the recovering puppy, Dr. Holt suggested that Laurie, “bring him home… just for the weekend.” That weekend has lasted nearly 12 years. Other than being a sloppy eater and drinker (without half of your lower jaw it is difficult to keep food and water in your mouth), Oscar went about a normal life as a member of the Strine/Holt household without any worries at all. 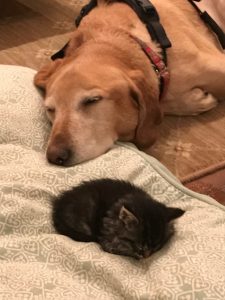 His favorite thing in the world to do is play. He plays with the cats, the kids, his grumpy dog housemate- Lizzie, squirrels, butterflies, and birds. In typical Labrador fashion, Oscar has never met another creature who wasn’t immediately deemed a friend. Despite the slightly unusual appearance of his short lower jaw, he is just another silly dog who is happy to be alive. When Oscar turned 8 years old, Laurie began to worry about him. He didn’t seem to have the stamina to play that he once had. Time spent chasing cats and squirrels was cut short and he was easily winded by the slightest activity. His bark changed and any effort that made him breathe heavily or pant caused a loud, raspy noise from the back of his throat.

Oscar was diagnosed with laryngeal paralysis. Laryngeal paralysis is not an uncommon finding in Labradors and other large breed dogs. As some dogs age, the function of their larynx declines. It is not completely understood why this happens, but the arytenoid cartilages, flaps that form a doorway to the trachea, become paralyzed in affected dogs and fail to open properly. Any exercise causes difficulty breathing. In extreme cases, dogs may “pass out” if they become too excited as their arytenoids cannot open wide enough to allow air to pass into the trachea. Seeing this happen to her dear friend was more than Laurie could bear.

There is a surgical procedure, the laryngeal tie back (arytenoid lateralization), that can improve the comfort and quality of life of affected dogs. During this surgery, one or both of the laryngeal cartilages is literally “tied” with suture in an open position to the wall of the larynx. This allows air to flow unimpeded into the trachea and lungs. The dog is able to exercise and engage in normal activity. Fortunately for Oscar, he lived in a household with two excellent veterinary surgeons. Dr. Holt performed the tie back surgery, and Oscar was like new again; happily, running, playing and chasing his way through life.

Oscar and his family settled back into their routine, and the next two years passed uneventfully. But, as all pet owners know, as our pets become older their risk of disease increases and a serious issue is potentially around every corner. Dr. Strine can still remember the day she let Oscar outside for his morning walk and he seemed uncomfortable in one of his hind legs. Watching him walk a little further confirmed he was quite lame in his left hind. She walked over to her friend and slowly ran her hands over his hips and down his legs. She gripped the middle of his left femur bone and he flinched in pain. Laurie sat down on the ground, burying her head in the thick yellow fur of his neck, trying hard not to cry. She suspected the worst. Pain associated with the femur and significant lameness usually means only one thing in older dogs, bone cancer. A few radiographs would be needed to confirm the diagnosis.

Oscar happily got into the car and drove with Laurie to work the same day. The nurses hoisted Oscar onto the radiology table, and asked the gentle boy to lay down. Long gone were his silly puppy days, and Oscar waited patiently while they bent his hips and knees this way and that to obtain the perfect X-ray. What Dr. Strine saw on those films made her heart sink. It just didn’t seem fair, or even possible. Oscar, yet again, was facing a serious illness requiring significant surgery and recovery. There was no denying it, Oscar had a large tumor in the bone of his femur and this was the cause of his lameness.

Although Oscar was 10 years old; however, he was a young 10. He found joy in every aspect of his life, and it seemed impossible that his time to leave this earth was truly upon us. He was strong and otherwise very healthy. Dr. Strine and her family decided they wanted to do anything necessary to save his life. Unfortunately, this would mean amputating the affected hind leg. How would Oscar do with only three legs? Only time would tell. 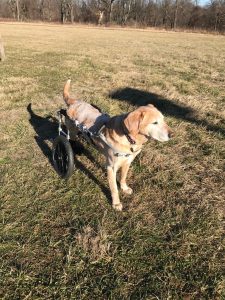 One of the many gems in the crown of the Matthew J Ryan Veterinary Hospital at Penn is their Oncology department. The Oncology service at Penn, aside from being extremely dedicated and compassionate, is dedicated to cutting edge cancer research. At the time of Oscar’s diagnosis, a unique study, researching the impact of a newly developed vaccine to treat dogs with osteosarcoma was in full swing. After surgery to remove his left hind leg he received injections of the osteosarcoma vaccine as part of the study.

To this day, 2 1/2 years later, Oscar is cancer free. We wish we could say his recovery was completely uneventful but seeing as Oscar is owned by not one but two veterinarians… of course there had to be a complication. Our friend developed a soft tissue sarcoma in his left hip area approximately six months post amputation of the lower part of his limb. Undaunted, his family prepared him for yet another surgery and that tumor was also successfully removed (ok… maybe it took two tries to remove it but who is really counting at this point?).

The year after his amputation, Oscar learned to navigate his world fairly well on just three legs. He continued to enjoy his walks and play time but, Laurie noticed a slow progression whereby these activities were gradually becoming more difficult. She bought a harness to help hold his hind leg up on walks, but neither she nor Oscar found this solution acceptable. After years of recommending dog wheelchairs to clients with small dogs who have experienced amputations or suffered from paralysis, Laurie thought maybe she would buy one for Oscar.

Despite a short learning curve, Oscar’s wheels have given him a new lease on life. He runs, chases, sniffs, hunts, and plays as if he was 5 years old again. In fact, Laurie tells us she often has trouble keeping up with him on their daily walks in the park. Oscar cannot be happier and because of that, Laurie is too.

The love that Laurie and her family share for Oscar is special, but not unique. We are so fortunate to live in a society that values pets as family members. The human companions of many animals we see at Longwood Veterinary Center routinely ask how they can continue to keep their pets happy, healthy and comfortable for as long as possible. They show their love not just one day of the year, but every second of the lifetime they share with the dogs and cats that have truly captured their hearts. In the immortal words of Elizabeth Barrett Browning, “How do I love thee? Let me count the ways.” Happy February from the doctors and nurses of Longwood Veterinary Hospital.