The Dog Who Lived– A Very Special Rescue Dog 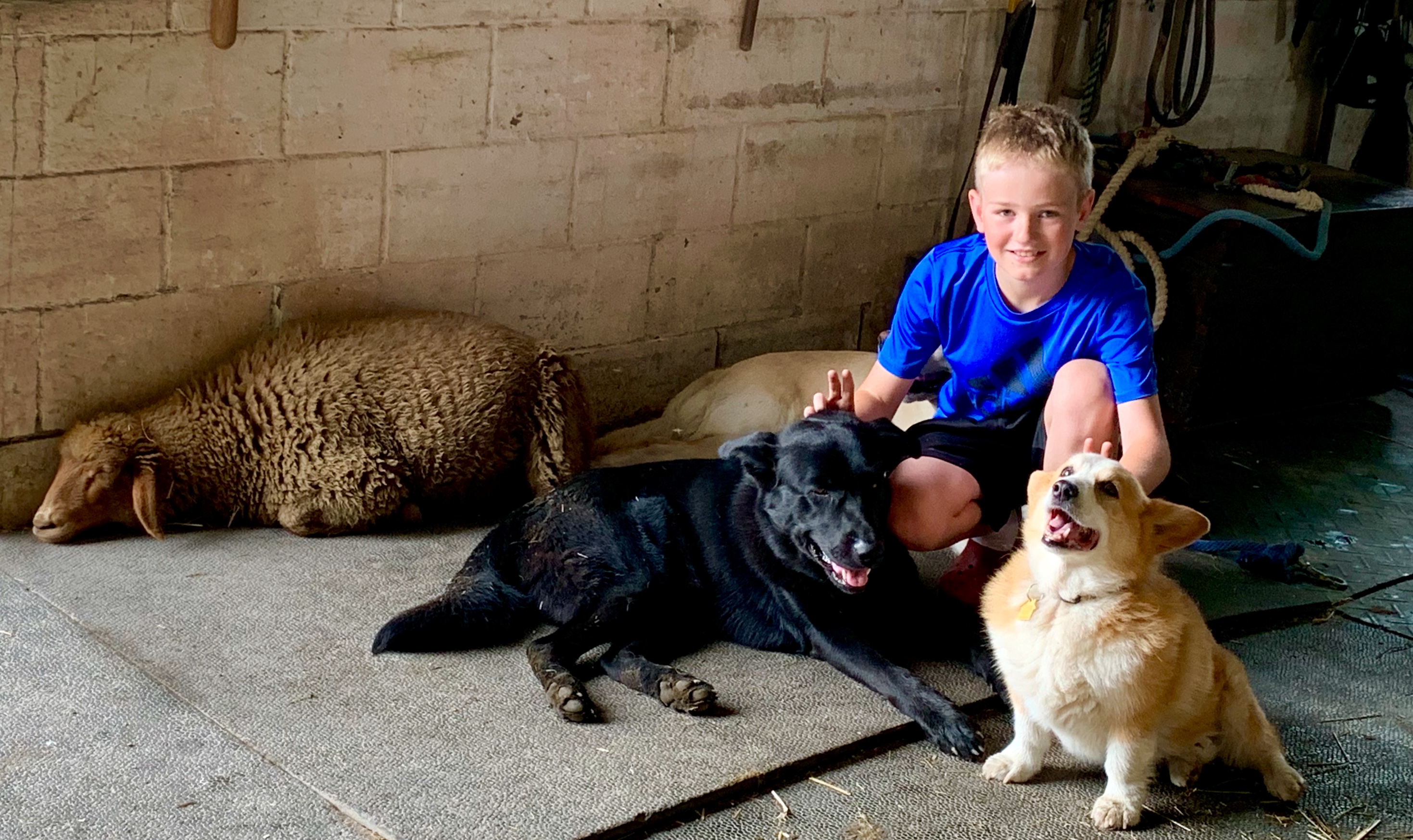 The practice of medicine is part science, part art, part miracle. As veterinarians, an injured or sick pet can test our emotional strength, strain our hearts, and cause us to question if we are doing the right thing. Some patients recover immediately, some take months, while others pass on beyond this world despite our best efforts. Often, diseases and medical concerns are readily solved with little thought or consultation. Others involve the proverbial “village” and only through the involvement of specialists, and years of accumulated knowledge, can a patient be saved. As we approach the one year anniversary of a very special case, one that embraced all of the worries we as veterinarians have, I would like to share with you, the clients and supporters of Longwood Veterinary Center, a story about a dog. 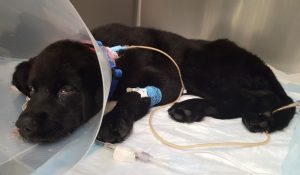 The call came just prior to closing. An 8-week old puppy, new to his family, had severe vomiting and diarrhea. He was weak and would not eat. “Could the puppy come over now?” a worried voice asked on the line. When Dr. Knipe examined the little puppy, he was in even worse condition than his owners realized. Her recommendation: hospitalization with intravenous fluid therapy, antibiotics, and medications to calm his upset stomach and inflamed intestines. Terry, one of our overnight nurses, was called to stay with him and treatment began. His owners were warned their new puppy may not live and treatment would be costly.

Twenty-four hours later he had not improved but was no worse. His owners could no longer afford his care and chose not to continue to engage with our practice. The little black puppy, now an orphan, was taken in as a ward of our hospital. We continued to treat him. In fact, every single nurse and doctor participated in his care and everyone wanted to save this sweet rescue dog. If you ask me today what it was about him that made me want to soldier on, encouraging him to try despite countless medical setbacks, I can only tell you there was something about his eyes.  Harry [sic] “Potter”, as we began to call him (after the young wizard who survived constant conflict and attempts on his life), had a way of peering directly into your heart with his sad, soulful eyes. His quiet and steady resolve, as he endured countless treatments from blood transfusions to injections of a potentially toxic antibiotic, had a way of inspiring you to want to give him just one more chance. 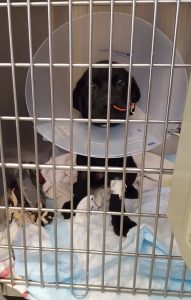 When he experienced severe complications including a plummeting white blood cell count, sepsis, and life-threatening anemia, we consulted specialists at the University of Pennsylvania. We followed their suggestions. Slowly, surely, “the boy who lived,” like his famous namesake, did just that. After several weeks of intensive care, Potter was ready to go home.  The problem was, he did not have one.  Although we had become his surrogate family, Potter had been relinquished to the hospital early on in the course of his disease and had no single person to call his own. After a discussion with my family, I decided to take Potter to our farm to recover there. We would find a “real” home after he was completely healed.  Although his blood counts were normal and diarrhea long resolved, he was a thin, weak shell of a puppy and his road to complete recovery would be long. It would take time for him to become a healthy dog.

While at our farm, Potter’s personality grew.  He was so curious.  He couldn’t contain his fascination for the sheep, horses, and cats. He thought chickens were mythical creatures. He viewed my female Lab as his long lost mother, my Corgis were his reluctant and grumpy “uncles.” My kids, already in love with him, wouldn’t let him out of their sight.  Even my husband had to admit, “He’s a great little dog.”  Despite his daily gains, something continued to nag me.  I feared Potter was losing his ability to walk.  At first, I chalked it up to muscle weakness and weight loss as he had been through so much. I remember telling Dr. Andrews, “Carla, I’m really worried about this guy.”

Soon my worst fears were realized.  What initially began as weakness gradually spread to complete inability to stand.  Potter’s trips to the barn continued but he was pushed down our driveway in an old baby stroller, salvaged from our basement and cleaned up by my daughter.  We had no idea what was wrong with him, no clue how to fix him.  Dark thoughts entered my mind, after all he had been through, should we give up now?  We consulted several veterinary neurologists at the University of Pennsylvania and HOPE Veterinary Specialists, who kindly offered to examine him. Dr. Siegfried took him to his first visit to HOPE. The specialists suspected Potter was suffering from Labrador Muscular Myopathy. Labrador Muscular Myopathy is a form of Centronuclear Myopathy (CNM), a severe genetic disease with neither treatment nor cure.   Severely affected animals lose their ability to stand, walk, and even eat.  A trip to the Matthew J. Ryan School of Veterinary Medicine of the University of Pennsylvania only supported a diagnosis no one wanted to hear or accept.

My children took Potter to the University of Pennsylvania with me. They heard the diagnosis and understood what I had to do.  The next day I sent them to visit their grandmother.  I had made the decision to put Potter to sleep and thought they would be better off distracted, far from our farm, where the memories of their little friend were still so fresh and strong. It was a Thursday night; my shift with Dr. Andrews was coming to an end. Potter was sleeping under my desk as she came to say her final goodbye. Recognizing a friendly face, he wagged his tail and pulled his body up to greet her. It was only a few inches, but he was trying to stand, something he had been incapable of the day before.  Carla looked at me and in unison we laughed, “We can’t stop now!” 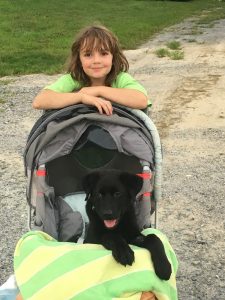 And so, “the boy who lived” continued to live and was given yet another chance. Slowly he became stronger. He learned to steady himself long enough to play mouth tag with my Labrador and was able to stand up while eating. Chasing chickens became his life’s ambition. Day by day, step by step, our once orphaned puppy continued to improve. By Christmastime, the baby stroller was once again banished to the basement.  He now races to the barn on his own power. The chickens and cats secretly wish he was still that weak little puppy of a year ago. Thankfully, that puppy is long gone. Potter is a normal, healthy dog now. Nothing about his current state, his goofy bark, or his silly smile reveals his struggle, or the battle fought by the nurses and doctors of Longwood Veterinary Center to save an orphaned puppy with soulful eyes. Oh, and as you might have guessed, he has a family now too.