Love in is the Air– But So Are Mosquitos

How To Prevent Heartworms 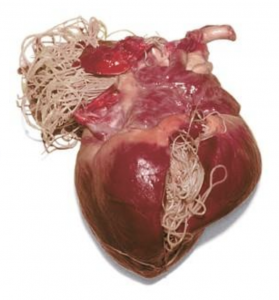 There is no better time than Valentine’s Day when love is in the air and your heart is so full it’s ready to burst, to talk about a heart bursting with heartworms. I know, buzzkill. It must just be a veterinary thing, but I just can’t look at a bowl full of spaghetti the same.

Ok, now that you are officially grossed out and seconds away from closing this blog, push yourself to read on so you can protect your pets from heartache like this!

Let’s Get Scientific About Heartworm Disease

Heartworm disease affects many mammalian species, including dogs, cats, several wild carnivores, and — in rare instances — humans. When a mosquito takes a blood meal from an infected animal, it ingests microfilaria (immature worms), which develop and mature into “infective stage” larvae over a period of 10 to 14 days while still inside the mosquito. When the infected mosquito bites another dog, cat, or susceptible wild animal, infective larvae are deposited onto the surface of the animal’s skin and enter the new host through the mosquito’s bite.

Once inside a new host, it takes approximately 6 months for the larvae to mature into adult heartworms. Once mature, heartworms can live for 5 to 7 years in dogs and up to 2 or 3 years in cats. They can grow up to one foot long and several hundred can be found in an infected dog.

A mixed population of mature worms will reproduce, creating microfilariae that can pass the infection along when another mosquito takes a blood meal, and the cycle repeats.

Who Should be Concerned? 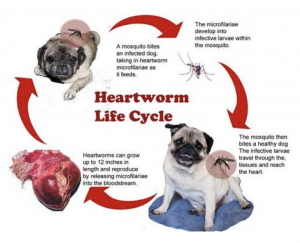 All pet owners should be concerned. Heartworm disease was once more prevalent in the south due to higher and more consistent temperatures. However, the geographic distribution of heartworm disease is changing. Warmer winters have become common even in northern locales and the mosquito season often lasts longer.

The incidence of the disease has also been influenced by natural disasters, such as Hurricane Katrina and Maria. In an outpouring of support for dogs and cats affected by natural disasters, many animals have been relocated to homes all over the country. If these animals are heartworm positive they can act as a reservoir for the disease in an area previously unaffected.

Indoor cats, unfortunately, are also at risk of contracting heartworm disease. Infected mosquitos may enter the house and can bite cats who reside there. It is reported by The American Heartworm Society, that out of all cats that were confirmed positive for heartworms, 25% of them were considered inside only. Sadly there is NO treatment for cats that contract heartworm disease! Many times chronic lung disease or sudden death are associated with feline heartworm disease.

How Can Heartworm Disease Be Diagnosed?

Most pet owners are familiar with the heartworm SNAP test, a simple, rapid, blood test, run in the hospital at your pet’s yearly exam. The SNAP test detects the presence of specific proteins (antigens) found in female heartworms. A microfilariae test scans a blood smear for the presence of circulating immature larvae. At LVC we use the SNAP-4DX which will also detect exposure to several tick-borne diseases. This offers lots of information in one simple test.

Heartworm infection in cats is harder to detect than in dogs, as cats are much less likely than dogs to have adult heartworms. The preferred method for screening cats includes the use of both an antigen and an antibody test. Your veterinarian may also use x-rays or ultrasound to look for heartworm infection.

How Do You Prevent Heartworm Disease?

Prevention is simple and easy: the administration of a heartworm preventative. Fortunately, there are several options available that are simple to use, tasty, and affordable.

Prevention of heartworm disease in dogs includes Proheart 6; an injection administered in our hospital every 6 months as a scheduled appointment, Heartgard Plus; a monthly oral chew, or a monthly topical called Revolution.

The cost of preventatives generally ranges between $7-$13 dollars per month — a small price to pay to keep your pet happy and healthy! An EIGHT YEAR supply of Heartgard is the same cost as a SINGLE treatment for heartworm disease and much less painful.

This Valentine’s Day, give the gift of a healthy and happy heart. Make sure your pet has a recent heartworm test and continues on year-round preventatives. You don’t want to see that spaghetti picture again do you?