The Gift of Communication 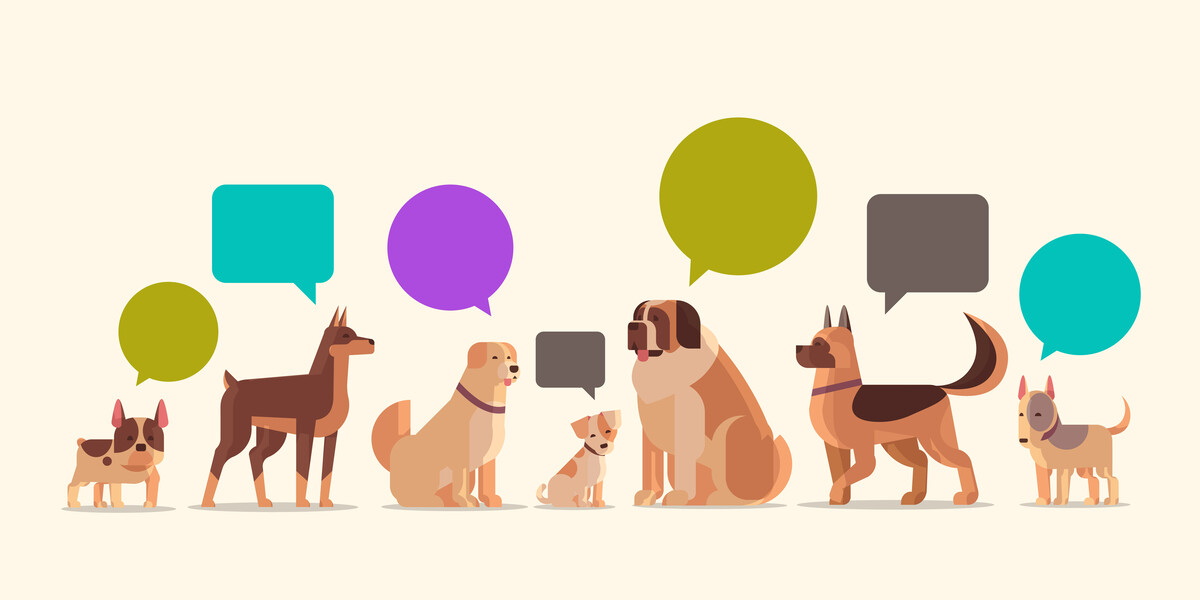 Have You Heard (of) Speech Boards?

Many of us love to show our appreciation for our friends and family during the holidays. Finding the perfect gift is often difficult, we all want something special and novel to express how much we care. This year, you might want to consider the gift of communication… with your pet, that is! Most of us have probably spent at least a few moments wishing we could actually talk to our pets and hoping they would answer us back (hopefully letting us know that Longwood Vet Center is one of their favorite places to spend time!). But how would one go about doing that in a practical way? The answer just might be speech buttons.

What are Speech Buttons?

A quick Google search of dog cognition and speech buttons will send you to several companies selling these novel training devices as well as information on the science and research being collected around them. Notable “influencer dogs” such as Bunny and Stella have their own websites and social media accounts that showcase their impressive vocabularies and ability to string together simple sentences on their speech boards. They seemingly are capable of telling their owner what they want to do, what they need, and even what may be bothering them.

A speech button board is a simple device. Most designs available to purchase include interlocking mats that contain small buttons that, when pushed, emit a pre-recorded sound such as “outside,” “eat,” or “toy.” More complicated boards will incorporate words that could be used to put together a sentence. For example, internet star, Bunny, reportedly told her owner, “Want cat down.” via her speech board in response to seeing the house cat sitting up high. Bunny apparently wanted the cat to come down to play with her, at least that was Bunny’s owner’s interpretation of the interaction.

As far as training your pet to use the mat, most companies selling the mats come with specific guides to training. In general, suggestions for success include the following:

When using training methods that tout the ability to “read your pet’s mind” or suggest your pet will develop a grasp of the human language that will prove both nuanced and complex, care must be taken not to overinterpret results or become entangled in the trap of anthropomorphization. Anthropomorphization is the tendency we humans have to ascribe human traits to non-human beings or objects. For example, we veterinarians often hear owners anthropomorphize when suggesting to us their pet peed in the house because they felt “spite” towards the owner or when pet aficionados fall in love with short-faced breeds because they seem more “ human baby-like” than other breeds.

There is a scientific phenomenon known as the “Clever Hans Effect.” Clever Hans was a famed horse who traveled the world with his trainer in the late 1800s and early 1900s, demonstrating supposed mental feats that only humans were previously thought to be capable of. His owner had taught him to count, add and subtract. Unsuspecting audiences did not realize that Hans was answering the arithmetic questions correctly, not because he could actually “do math” but because of his acute awareness of small, imperceptible clues his owner was giving off (perhaps unintentionally). People “thought” Hans was counting when in fact he was just waiting to stop counting at the correct number based on seeing his owner relax or show signs of relief when the horse happened upon the answer.

Critics of the speech boards often cite issues with a “citizen scientist” experiment being conducted by Dr. Federico Rossano of UC San Diego. Interested members of the public, after purchasing a speech board, are invited to share videos and experiences with the researchers in hopes of helping Dr. Rossano understand if pets can learn symbols as children do and what use pets will make of this knowledge. Skeptics of his work cite the fact that most well-designed scientific experiments do not require subjects to pay to be part of a study (by buying the board), owner interpretation may be highly anthropomorphized, and owners may edit out the frequency of incorrect use of symbols in favor of positive or correct responses.

Despite the skepticism, you cannot deny that trying to teach your pet to use the board is just plain fun! The fact is, the average person probably need not get too worried about experiments that are less than perfectly designed. Instead, they should simply enjoy the fact they are spending more active and engaged time with their pets. Our pets surely communicate to us, time and time again, that all they truly need is our love, our attention, and heartfelt care.

**** Notice I have said “pet” not just dog throughout this article? Cats and other animals can learn to use the button board too!